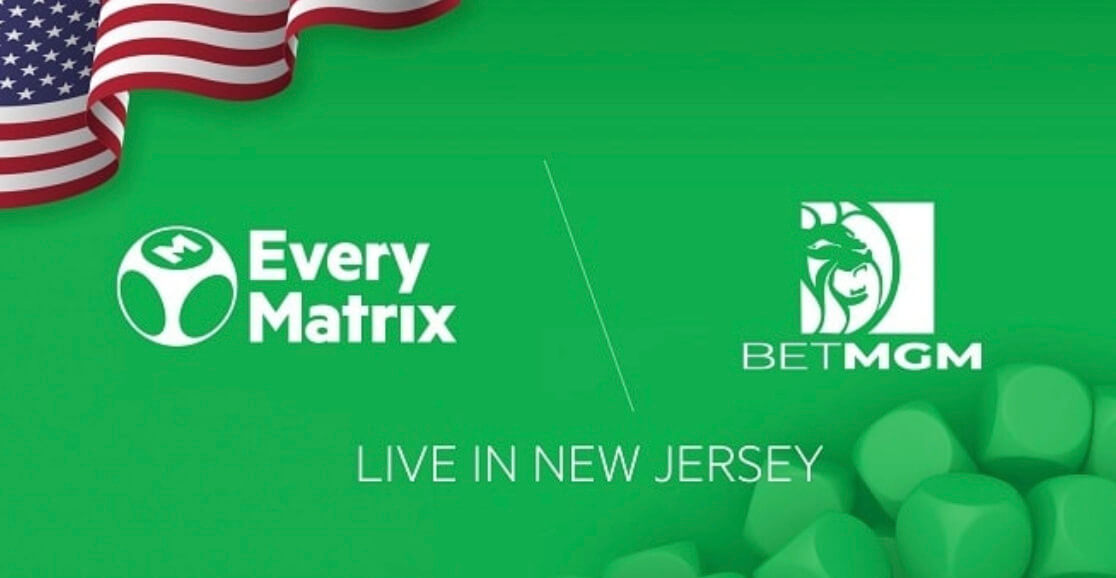 Online gaming software provider EveryMatrix announced that it had expanded its operations to the United States through a new BetMGM partnership. The move will give American players access to various casino games and betting options.

New Jersey is just the first step of this collaboration. EveryMatrix is in the process of entering a few other American states.

The partnership agreement between these two massive brands hit the news earlier this year. Now, American consumers will get to reap the benefits of the new power couple. EveryMatrix boasts top-class titles. Some of these are Armadillo Goes West, John Daly Spin It and Win It, and the Amanda Nunes-themed The Lioness. The company’s game portfolio is continually expanded with new releases, like the Mythological Mayhem Supreme Streaks. This latest title went live in September 2022.

It’s been announced that BetMGM will use the CasinoEngine platform by EveryMatrix. It will provide it access to Spearhead Studios and Armadillo Studios content.

“Delighted” by the Collaboration

EveryMatrix’ President for the American market, Erik Nyman, commented on the milestone. He expressed his delight about the collaboration with BetMGM. He described going live in the US as “one of the largest undertakings” among iGaming suppliers.

Nyman highlighted how BetMGM was among the most “progressive operators.” This made EveryMatrix’s breakthrough in the American market even more important. He concluded his statement by sharing the future steps of this collaboration, which include delivering the brand’s content across multiple states.

Oliver Bartlett, director of gaming for BetMGM, also shared his thoughts on the deal. He shared that his team is just as excited to work with EveryMatrix and bring its “great content” to BetMGM players in the United States.

EveryMatrix launched in the US with BetMGM following a partnership announcement in June. The launch will bring great content to BetMGM players in the US, strengthening the operator’s position as the leading player in the country. At least, that’s how Bartlett described it a few months ago when he commented on the freshly announced collaboration.

The launch of EveryMatrix in the United States with BetMGM is a big step forward for both companies. BetMGM is committed to providing its customers with world-class gaming experiences, and the addition of EveryMatrix’s engaging titles will help them reach that goal.

American consumers are the real winner of this collaboration. EveryMatrix already has a strong name in the European gambling market, where it works with the best brands. So, its partnership with BetMGM promises even better games and a top-class user experience for New Jersey players.

For example, consumers will now get an exclusive chance to try various releases by popular providers. All of them are part of the EveryMatrix game aggregator. One such title is the already famous The Lioness.

The Lioness is Armadillo Studios’ first branded slot. The game will celebrate the feats of the professional Brazilian MMA champion Amanda “The Lioness” Nunes. Armadillo Studios said the game would go live on August 2 this year. That was three days after Nunes’ match against her fellow MMA competitor Julianna Peña.

With this new alliance, EveryMatrix is expanding its global reach even further. The move is part of its broader goal to create a comprehensive platform for online gaming operators. The brand wants to give operators access to everything they need from one product. This includes casino games, sports betting options, live dealer games, virtual sports, and more. Players will now have access to some of the most popular games through easy-to-use software provided by EveryMatrix.

EveryMatrix is a leading software provider for online gaming operators and casinos. Founded in 2008 by Stian Hornsletten, the company has quickly become one of the most trusted providers in the industry. More than 5,000 sites worldwide use their software, including several major brands like William Hill and Mr Green. The company is live in tens of different markets, including Curacao, Germany, Norway, and Sweden. It’s also in the process of entering the lucrative Ontario market alongside joining a few more US states. Pennsylvania, Michigan, and West Virginia are first on the list.

BetMGM comes from MGM Resorts International. This global entertainment company owns and operates many top casino brands worldwide. By partnering with EveryMatrix, the operator aims to leverage its expertise in land-based gambling and apply it to the fast-growing digital market. The new partnership will make BetMGM’s wide range of games available to players across America. The company already has a successful online casino platform in New Jersey powered by various providers. Yet, it continues to invest in elevating the user experience by adding new content whenever possible.

Source: EveryMatrix goes live in the U.S. with BetMGM